Pilots' pilots.
Here is my two cents procedure and suggestions to remove your steering box on your own.
This is a long post so here is the start of it and I'll finalise it when I'll get more time.


First and foremost, immobilise your vehicle properly and don't go under until it's firmly and steadily set up on axle stands on a flat surface because since you have a van there are people who need you and they won't like you anymore if you are as flat as a pancake because it dropped onto your face as you were working under it to repair it. Stay in shape, make it stable!

Lift up front of van high as to have enough room for arm movements.
Take off driver side wheel.
Take down tie rod end from drop arm
method used: Bang Bang (see pic) but on the right spot (see other pic) 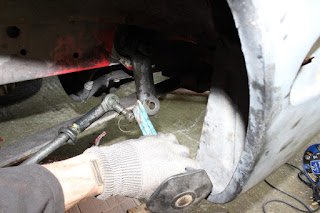 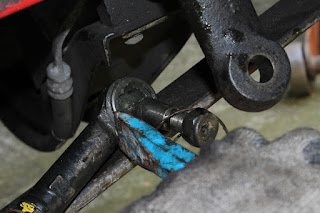 other methods: fork etc will write up later 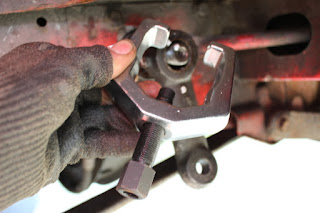 other methods:
Heat drop arm around shaft (risk! Not so much as to melt seal inside).Hit both side of drop arm with similar lump hammers.
will write up later

Get caps and empty containers ready to stop and deal with oil spills.
Unscrew 2 pipes from box (from reservoir and from high pressure supply pipe), leave short pipe on as it’s connected to box only. Leave to empty itself.

In cabin, remove dashboard part under steering wheel (and around ignition barrel?).
In engine bay, put steering column to straight and mark placement of shaft with steering column coupling shaft to remember (I use tipex corrector) [check manual around this issue as I think it can be worked out in some other way when refitting but always good to make marks in case it helps] and remove completely pinch bolts from steering wheel shaft. 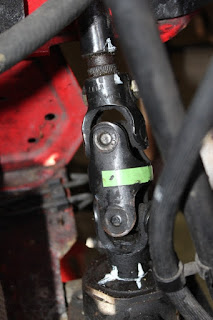 In cabin, support the steering column and remove the 2 nuts and plate that hold the column (note that here you might have to remove a plastic part that connects the shaft to the body where it goes through to the engine bay. I think I read it’s recommended to do this before removing the nuts and plate - it’s broken and missing on mine so I didn’t have to). No need to disconnect any but watch out for cables and not to reap any off. 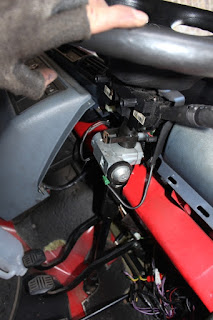 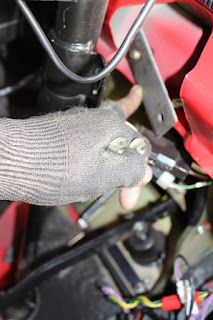 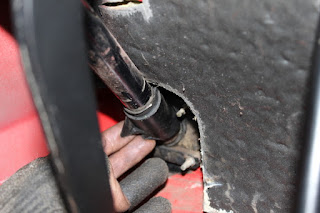 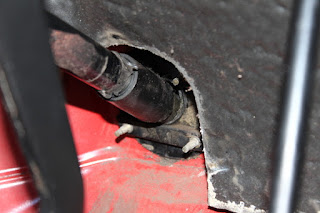 broken bit on mine 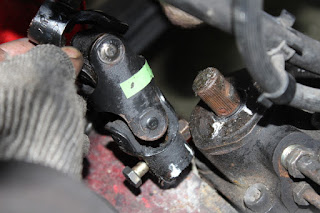 Pull shaft up until about 3/4 inches are left on engine bay side (or whatever is enough to get steering column coupling shaft out).
Disconnect the high pressure supply pipe from the engine crossmember (clips)
SUPPORT THE ENGINE PROPERLY (see manual and pancake story at beginning of this post)
and undo the 2 bolts and  the plate at bottom of steering box. 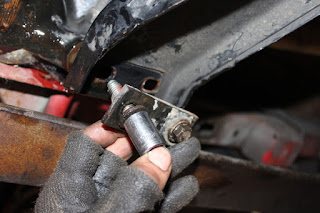 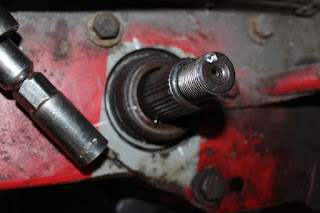 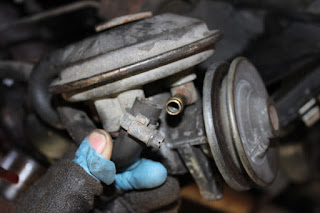 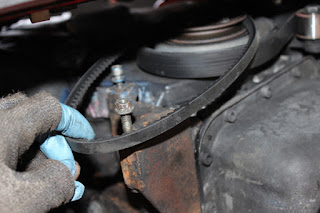 Getting the box out.
Method I used:
Get a copper hammer (thanks Tony Norbury for this and many more tips) and hit at the bottom of box on the side facing the back of the van. 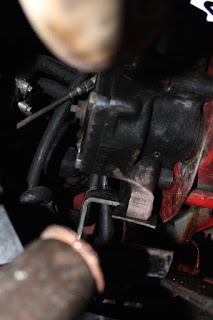 That should rotate the bottom of the box upward toward the front of the van
so you can access the 2 bolts of the box lower mounting fixing where the crossmember was connected.

At the start I did hammer the box down from the top, hitting on the place where the hole for the right hand top bolt was (when still in place) This made it rotate a bit more but not that much and it was noisy, exhausting and not so efficient so I came up with the following solution. 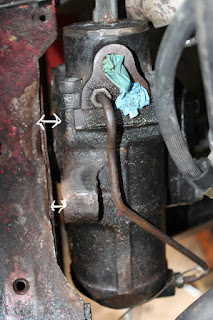 This is what I called the Gap of Hope. The rotation started showing some progress. and my biceps to cry.
Also the lower little white arrow show where I was hitting to rotate the box in the opposite direction.

Get a L-shaped bracket (thick metal) with a hole of similar size to bolt. The shortest the short side of the L shape is the better I reckon, and the longest the long side is best too but not crucial as it can be extended.
You should also find a short bit of metal with similar thickness to even up pressure from the side of the other bolt - so as not to bend the original plate.
Bolt this bracket and the short bit under the plate where the crossmember was. 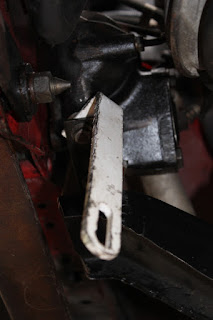 You have made yourself a lever and you can now rotate the box indefinitely until it comes out.
Lubricant where/when possible helps. There was quite some rust around mine. 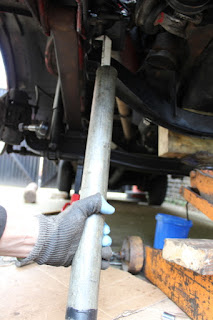 You can remove the box one out from under through where the vacuum pump was. 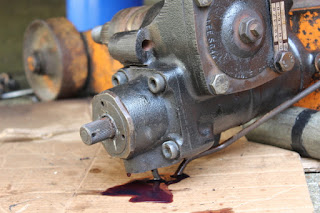 Think the box outside.
Done.
Amazing power of the mind.

Many thanks to all from Club LDV who have helped with ideas and suggestions all throughout.

Thanks for reading and posting. Hope you found the blog helpful.
(Note that if you spam, you 're out. Don't waste your time nor mine.)